'From Spindly to Shohin' by Andy Baker at Tree in a pot
In 2013, I removed this Potentilla Fruticosa from the ground and placed it into a pot. Shortly afterwards I questioned myself - 'does this material have a future as a bonsai tree?' I even asked the question on a forum 'any styling tips'? The response was minimal and I received a message explaining to me that 'sometimes a tree or shrub is not always workable and to put it back into the ground as a plant in the garden.' 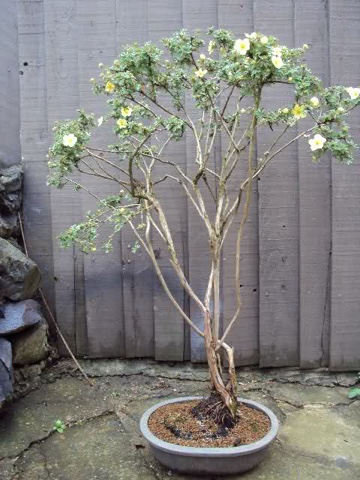 Step 1
With the tree looking spindly and after much consideration, I decided to take away the trunk on the right hand side and cut off any other large branches. My idea was to encourage back budding by working down to a single trunk,
By the way - When the tree was first dug up from the ground, its was also sawn in half. imagine, even more spindly trunks.
2013 - a few days later. 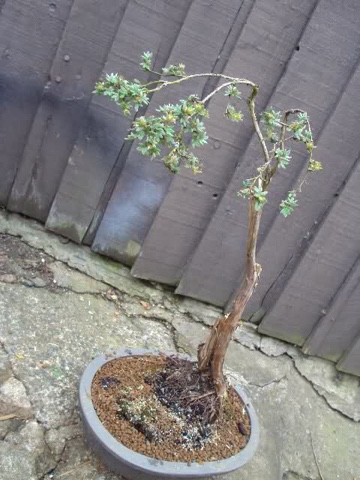 Within a couple of months, the tree had grown a single twig lower down the trunk (I then trained the single twig to become the overall crown of the tree and removed the taller part of the trunk.
In 2014 I had a canopy beginning to grow from a single twig and repotted into a smaller training pot.
Step 2
Summer 2014 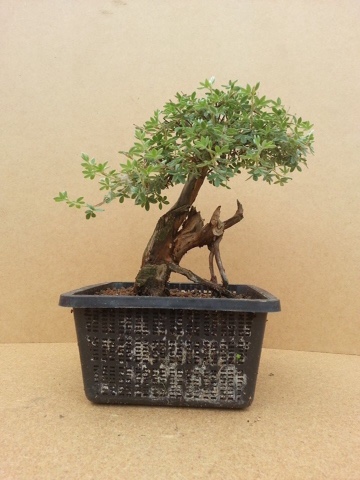 During the remainder of the season and in winter 2014 I removed the 3 roots that were growing downwards into the pot. From experience - I tend not to remove any branches during late autumn on potentilla. For health reasons.
By spring 2015 the tree was looking healthy. The tree had responded well to feeding, along with good aeration in the soil - this simple technique produced a mass of fibrous roots.
Step 3
Summer 2015
I repotted the tree into its new training pot, the roots were reduced, this was to allow for the tree to learn to grow in a compact rootball and within a smaller pot. 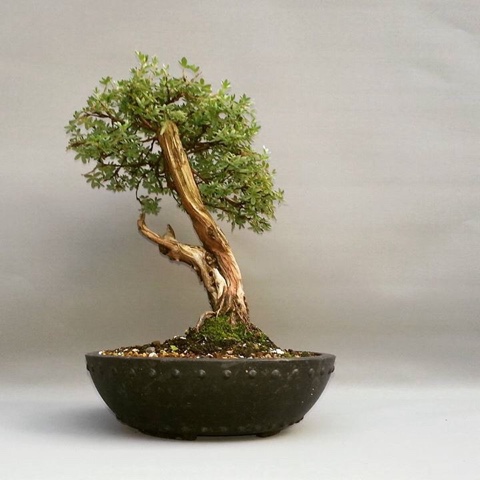 The tree required little maintenance during 2015 and was continuing to show good signs of health. The tree was beginning to take shape as a tree. At this point, I decided to purchase a more suitable bonsai pot for it, ready for its repot in spring 2016.
Step 4
Summer 2016
As you can see below; What was once a tall spindly flowering shrub is now considered to be a Shohin sized bonsai tree. The tree will now remain in it's current pot for approx 2 full growing seasons. 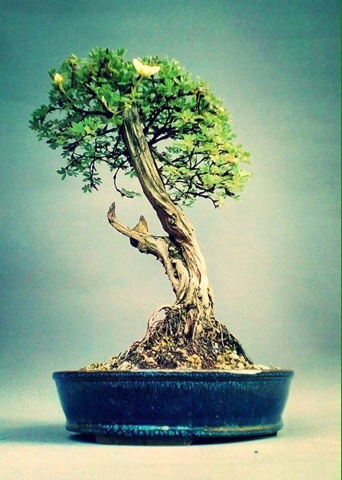 Updates to follow.
Thanks for reading this article. From Spindly to Shohin (Potentilla Progression)
Tree and article by Andy Baker. #madewithand #treeinapot #bonsaiprogression
Tree in a Pot at 12:02
Share